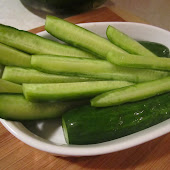 Am I not right? &nbsp; Quick pickled cucumbers are one of my summer cravings. The smell of freshly pickled cucumbers reminds me of a Siberian village, with roosters diligently crowing at dawn, with cows mooing on their way to pasture, with kind babushkas and their endless hooked rugs. September 30, 2010       by Nadia 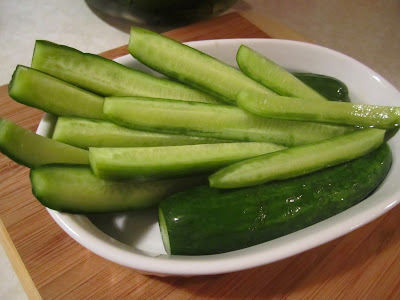 Sometimes a normal person has cravings for sweet, sour or salty, and many other things. Don't get me wrong, but I think it's very healthy to follow your cravings, otherwise you will get depressed and plain unhappy, and there is nothing good about it. Am I not right?
Quick pickled cucumbers are one of my summer cravings. The smell of freshly pickled cucumbers reminds me of a Siberian village, with roosters diligently crowing at dawn, with cows mooing on their way to pasture, with kind babushkas and their endless hooked rugs. They also remind me how my mama and I used to go to bazaar where friendly countrymen offered us a free cucumber to try.
Pickled cucumbers and other vegetables are traditional Russian preparations. Almost every Russian house wife can make winter preserves with tomatoes and cucumbers. However winter preserves are rather time consuming and sometimes very complicated. Today's recipe is for super-fast semi-salted cucumbers. They are very simple to do and make a fabulous addition to many dishes. 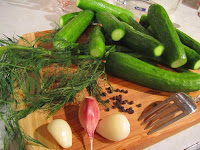 What you need:
10-12 Armenian cucumbers
(the ones with very thin skin)
3-5 cloves garlic, coarsely sliced
Bunch of overgrown dill
10-15 black pepper corns
1 liter filtered water
2 tbsp coarse Kosher salt
Hot pepper (optional)
Method:
Put water with salt on high heat and let it come to boil.
Meanwhile wash cucumbers, cut the ends, and pierce each cucumber with a fork in three places. Then work in layers in a medium sauce pan about 8-10" in diameter. I used Pyrex glass bowl with lid. Throw a few garlic slices and part of dill on the bottom, then put a layer of cucumbers. Then put garlic and dill again, and follow with the rest of cucumbers. 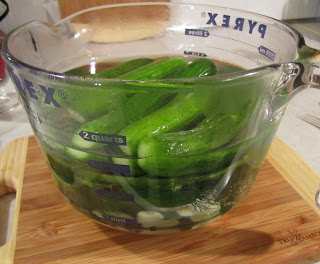 As soon as the water starts to boil, toss pepper corns in and boil for 1 minute, then pour carefully over cucumbers. 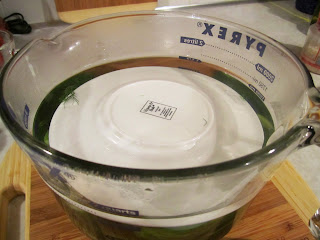 Cover with a saucer, bottom up, to not let cucumbers float, cover with lid and a towel. Let your cucumbers cool slowly overnight. 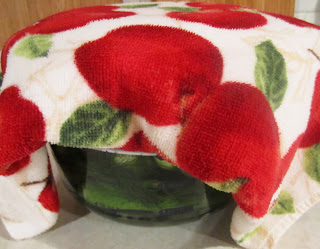 In the morning put in the fridge to chill. Two hours later they are ready to eat!
Notes:
This tiny batch of cucumbers that I made would seem awfully funny to any Siberian villager. They make cucumbers in barrels or in big glass jars. But the bowl of 12 cucumbers will certainly satisfy my craving.
The cucumbers I used for some reason are called Armenian in our area. Actually any small cucumbers will do fine. Armenian cucumbers are never bitter, so if you will use other varieties, try them from the darker end and sort out bitter ones.
The older the dill the better it is for pickled preserves. When it's overgrown the aroma is very strong, and that's exactly what you need. For preserves we usually kept a bunch or two of dried dill with flowers or even seeds. Dill seeds have a very specific aroma that is very good in pickles.
The longer pickled cucumbers stand in the fridge, the more salted they become, they will lose their fresh green color and will look and taste more like real fully salted cucumbers. You can use them in many salads, soups,  with meats, and what not.
I like them as they are - filch one or two right from the fridge and eat just like that. Another favourite is to make bread and butter, put slices of pickled  cucumbers on top and sprinkle with black pepper.
We can create fancy foods with exotic ingredients, but when we get tired of this there is always simple food to enjoy.
Tags:    appetizer • easy • preserves • quick • Russian traditional • summer • vegetarian
Summary: a easy appetizer recipe
blog comments powered by Disqus
Share this recipe:
Tweet
You may also like: