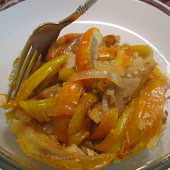 Those from Europe are a little scornful&nbsp;of those from&nbsp;South America, but both are very friendly and hard working people. They&nbsp;keep bakeries, restaurants, and little shops with Brazilian specialty foods. A few years ago I saw jilo in one of those shops. September 08, 2010       by Nadia 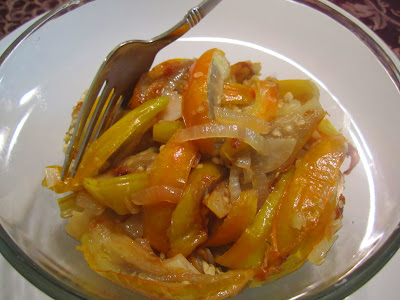 I live in the area where due to some mysterious immigration tendencies there are many Portuguese speaking people, some are from Brazil, some from Portugal. Those from Europe are a little scornful of those from South America, but both are very friendly and hard working people. They keep bakeries, restaurants, and little shops with Brazilian specialty foods. A few years ago I saw jilo in one of those shops. Little green fruit looked unfamiliar and teased with new possibilities in the kitchen. I grabbed a few and cooked them as I would summer eggplant. To my disappointment it turned out so bad that I had to toss it to the trash. It was bitter and tangy - not eatable at all. 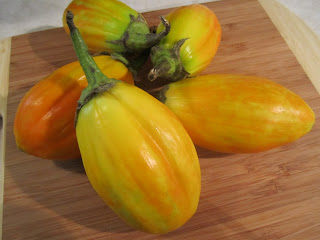 I didn't think about jilo until this summer when I ran into it at a farm stand. There was a Brazilian woman buying jilos, and the expression  of her face was as if she just found something dear to her heart. I asked how she cooked it, and she said just fry. Hm, easier said than done... Anyway, I decided to give it another try and bought some. Then I completely forgot about them, and the fruit sat in my fridge for about a week or so. They transferred into bright yellow to orange color, and I thought they were no good. When I cut one jilo, the pulp was light and looked as a good ripe eggplant. So, this time I cooked my jilos as I would winter eggplant. 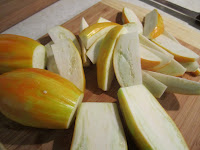 Cut jilos in wedges, arrange in layers in a colander, and generously sprinkle each layer with coarse salt (I used kosher salt). Let it "sweat" for about 30 minutes. It really looks like the wedges are sweating - salt will draw juice and bitterness out (this is a winter eggplant preparation trick). After big drops of juice are formed on the surface of wedges, rinse them with cold water, dry with paper towels, and saute in olive oil along with onions on medium heat until tender, salt to taste. Remove from heat and mix in white vinegar.
Let it cool and serve as a wonderful appetiser, with toast and fresh tomatoes.

Notes:
Jilos are very similar to eggplant, but the pulp is denser and mellower.
As you can see, white vinegar is not only for cleanng. :) It is neutral in flavor, it gives necessary sourness, but doesn't dominate the taste of the main ingredient.
As I ate jilos and seeped good red wine I couldn't help but wonder about many little discoveries that are waiting for me on our fruitful planet Earth.