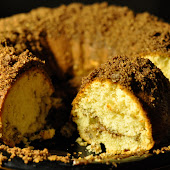 Finally I have broken my hiatus from cooking, which had begun to extend dangerously. It's fascinating what a staggering effect failure has on motivation (and I did have a few cooking failures recently, mostly gelatin-related). But when is it ever easy? August 11, 2010       by Masha 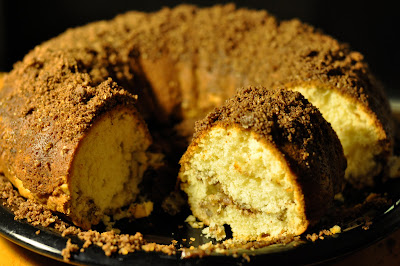 Finally I have broken my hiatus from cooking, which had begun to extend dangerously. It's fascinating what a staggering effect failure has on motivation (and I did have a few cooking failures recently, mostly gelatin-related). But when is it ever easy? Nothing will come out right, if you quit after the first few stumbles. It is true, I am doing this for fun. But as long as the fun is constructive, it cannot thrive without perseverance. Mastery (and oh am I far from it) has never been achieved by a coward. After a few detours through the thorn bushes, I'm in the clear again with this delicious coffee cake.

A sour-cream lover at heart, I've been searching for a perfect sour cream based coffee cake. First, I tried a simpler butter-less recipe for a raspberry coffee cake, where sour cream is mixed into the dough pretty much at the onset. It was pretty good, but no cigar (see picture on the left). The dough came out too heavy and the breadcrumbs sunk to the bottom as the dough was cooking (shame and shambles).

This time I found the perfect, albeit a bit more involved, recipe. The recipe presented here is a close adaptation of the recipe from Carole Walter's book Great Coffee Cakes, Sticky Buns, Muffins & More

. I used slightly different proportions and additional spices, but the credit for the very interesting sour-cream dough goes to the original recipe.

How to do it:
First, mix sour cream with baking soda in a medium bowl and let stand while you make other preparations (1 hour recommended). The mixture will rapidly increase in volume as the acidic sour cream reacts with the baking soda, which is a base. Cut butter into cubes and place in a large bowl. Butter a coffee cake pan thoroughly and set aside (you may warm it a little and then smother with butter).

While the butter is softening, prepare the nutty filling by placing all ingredients in a chopper and pulsing a few times. Now is a good time to turn the oven on to 350 degrees. Don't forget to pre-heat the oven.

Mix and then whip the butter with a wooden spoon, until it becomes soft, fluffy and much whiter than before. Set up a mixer. Add confectioner's sugar in portions, mixing it into the butter thoroughly before adding the next portion. Then, add eggs one at a time, mixing thoroughly in between. (Note: mixing eggs into the butter, though recommended in the original recipe, seems like the wrong time. Mom, any feedback on this?) Finally, pour in vanilla and liqueur and mix thoroughly again.

Combine all the dry ingredients (flour, baking powder, salt) in a separate bowl. Add a portion of this flour mix to the batter and mix. Then, add a portion of the sour cream and mix again. Use the slowest mixer speed, as it may break the bubbles formed by the baking soda if the speed is too high. Continue adding flour mix and sour cream separately in 2 or 3 installments each, mixing briefly in between.

Now, pour half of the batter into the pan and spread evenly. Pour the nut mixture over the batter in the pan and spread evenly. Pour the rest of the batter in and spread as best you can (this can be a challenge).
Bake for about 35 minutes, or until done. Baking will take more time in a regular pan (no donut hole). Don't overbake. It's done when a dry wooden stick (chopstick, toothpic, etc) inserted into the center of the dough comes out clean. This is an old trick even my grandma used, and I was surprised that it's also known in US, as Walter mentions it in her book.

Let the finished cake "rest" for 5 minutes out of the oven covered by a hand cloth. Prepare the sprinkle by finely chopping all ingredients in a chopper. Flip the coffee cake pot over a serving dish, hoping for the best. Sprinkle the cake with the sprinkle. It doesn't stick very well, so just save some in the center hole and spoon onto each serving. It really adds a nice touch.

Notes:
This is by far the strangest part of the recipe. Ordinarily, it is essential to put baking-soda based dough into the oven as soon as the baking soda reacts with the acidic ingredient (lemon juice, buttermilk, sour cream). In this recipe, the reaction goes on for an hour. At the end of the hour, the sour cream has an uneven consistency, almost starting to resemble cheese. "There is no way this is going to work," thought I, but was wrong. The dough raised handsomely. Next time I will try to only give sour cream 15 minutes to stand. My hunch is that it might be better. I will also try making a slightly more liquid batter.
Butter adds moistness to the cake, but make sure not to over-bake. I almost did, and it would have turned out quite dry.
The original recipe calls for a lot less nuts, but I think: the nuttier the better.