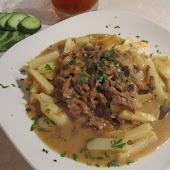 Bœuf Stroganoff (Beef Stroganoff, or just Befstroganov) is one of Russian traditional and loved meat dishes. I remember my mother's kitchen and wonderful aroma of cooking meat, and sauce, and fried potatoes. It was an all-time favourite and never failed to be well prepared. August 29, 2010       by Nadia 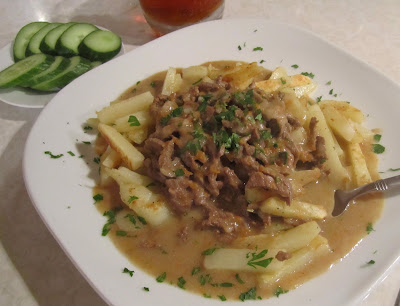 Bœuf Stroganoff (Beef Stroganoff, or just Befstroganov) is one of Russian traditional and loved meat dishes. I remember my mother's kitchen and wonderful aroma of cooking meat, and sauce, and fried potatoes. It was an all-time favourite and never failed to be well prepared.
The dish of finely cut beef in sour cream sauce was invented either by count Stroganoff of Russia or his chef in the 19th century. Stroganoff used to have open houses with dinner served for everybody who happened to enter the house, whether it was a nobleman or a peasant. That's when this dish was created  - it was easily separated into portions and was tasty at the same time. There are other versions of its origin, but I like this one - it seems the most logical to me. Later this recipe made its way into many cookbooks and became available to everybody.
I always thought about befstroganov as a cold weather dish, but Alex has been asking for a long time, so I surrendered and made it today. I used young fried potatoes on the side to make it feel more summer like (that's why they look so pale on the picture).


Method:
Cut meat first in thin slices (about 0.5 cm), then put two or three slices together and cut them in thin strips, also about 0.5 cm thick. The length of each strip is about 2-3 inches. It is a rather time consuming process, but patience pays off later since this way of thin cutting makes a special impression and, to my opinion, influences taste.
Melt butter and oil in a big frying pan with tall sides. Saute meat until all liquid evaporates, add onions and carrot, salt and pepper, and continue to saute until onions are just slightly caramelized. Cover with boiling water, add more salt to taste, and simmer until the meat is tender. Mix flour in 1/2 or a bit more water to smoothness (it's your sauce thickener), and gradually pour into the meat, constantly and briskly stirring. Make the sauce slightly thicker than you wish, add sour cream (it will thin the sauce a bit), stir continually, otherwise sour cream becomes cottage cheese. Add garlic in the end, make a final stir, and remove from heat.
Serve with fried potatoes, fresh cucumbers and tomatoes.


Notes:
Fried potatoes, cut in long pieces as French fries, but fried on a skillet,  is a classic side dish  for befstroganov, and a favourite of almost all Russians. In Russian restaurants they also served potatoes fri (that was either French fries or strange looking potatoes cut very thinly and also cooked in oil). Befstroganov can be served with many other side dishes as well. It's just perfect with all kinds of pasta, with rice, buckwheat or mashed potatoes.
I added garlic incidentally (had one left over clove) a few years ago. It transferred a very good dish into a perfect one, as it often happens with small experiments in the kitchen. But it is certainly a matter of taste.
There were no carrots in the original recipe (though there are many versions), but finely grated carrots add this pleasant orangy color and a tiny bit of sweetness to the sauce.
Befstroganov must be served very hot, and fresh cool vegetables (I prefer crunchy cucumber slices) create contrast and  make a fine accompaniment to the dish.
When I have some befstroganov left in the fridge, I also like to warm it up and eat it with a toast or bread. Those pieces of bread dipped in sauce are absolutely delicious...