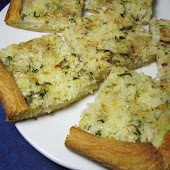 Since we had plenty of fabulous fish of different kinds ( pike , sturgeon , sterlet to name a few), mama made various fish dishes - ukha (fish soup), fish jelly, and certainly fish pies. The fish pie was the winner among all. After eagerly waiting as the wonderful aroma of the baking pie spread from the kitchen, - what joy it was to finally land at the table and indulge in this winter treat! August 29, 2011       by Nadia 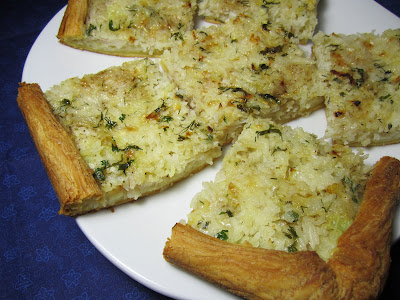 Baking fish pies in winter was a tradition in our family. Fish was abundant and readily available, thanks to my father's rewarding occupation. He was a pilot of a small meteorological crew, and brought sacks of frozen fish and many other goodies from his flights to the north. The Soviet food industry was near to nonexistent, so all those things were very handy during harsh Siberian winters.

Looking back, now it seems unreal how we lived in those days. In our free-standing metal garage outside the apartment building we used to store a sack of frozen fish, a barrel of sauerkraut made in our kitchen, a bucket of northern cranberries, and other food that could stand the frost and retain its taste. We also stored meat and poultry in netted bags hanging outside the kitchen window, because our three fridges didn't have enough space to hold everything we needed to live through the winter. To survive nicely we had to stock up. And nice it was - I remember my childhood winters as full of delectable viands.

Now back to fish. Since we had plenty of fabulous fish of different kinds (pike, sturgeon, sterlet to name a few), mama made various fish dishes - ukha (fish soup), fish jelly, and certainly fish pies. The fish pie was the winner among all. After eagerly waiting as the wonderful aroma of the baking pie spread from the kitchen, - what joy it was to finally land at the table and indulge in this winter treat!

Classic fish pie is a closed kind of pie, where dough laid on top covers the filling. Today's fish pie recipe was actually the result of a mistake that often leads to a discovery. The plan was to make a traditional closed pie, but I suddenly realized that there was not enough dough (I used store bought dough). I thought what the heck, and made an open pie variation. Surprisingly, it turned out very tasty: not too much dough, with juicy delicate filling. Mama would approve. :)

Method:
1. Rinse rice in cold water, cover with filtered water so there are about two inches over rice, add salt. Put on high heat, bring to boil stirring, reduce heat to low. You need boiled rice, not the one that absorbs all water, so add more water if necessary.
2. While rice is boiling saute chopped onion in 2-3 tbsp olive oil.
3. When rice is almost ready after 12-15 minutes of boiling, remove from heat, pour through the sieve, rince with cold water, and set aside to drain. 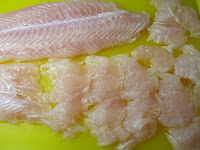 4. Swich your oven on at 365 F to preheat. Slice the fish into thin slices about 1/3". They don't have to be perfect.
5. Roll out the dough in thin layer to cover 12"x10" baking sheet with low sides. Make the dough about 1.5 inches longer and wider than the sheet bottom, to make the sides of your pie. Transfer the dough to thinly oiled baking sheet, straighten it with your fingers - make it look right.
6. Mix rice with onion, taste for salt, add more if desired. Spread about half of the rice over the dough in thin layer. I put tea spoons of rice in small mounds over the dough, then evened them out.

7. Put fish slices over rice, spread evenly. Sprinkle with salt and black pepper, put bay leaves  under fish in different spots.
8. Cover fish with the remainder of the rice, it will be a very thin layer. Sprinkle with herbs. 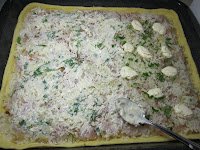 9. Mix mayo with garlic and spread in a thin layer over rice and herbs using a wavy smearing motion so that the rice is not disturbed much, but stays evenly distributed.
10. Bend the sides in toward the center, helping with a table knife. Pinch the corners.
11. Bake for 20 minutes in the preheated oven (365 F), then put on broil for a touch of gold on top. Watch closely as the pie broils! If sides start to brown too quickly, cover them with tin foil, leaving the middle of the pie open.
12. Slide the pie out of the pie dish and onto paper towels to cool while it is still stiff. It will become softer when cooled. Cut in pieces of desired size (I had 12 pieces), serve when it's still hot with fish or vegetable broth.
Notes:
This is a very versatile dish: it makes a main course as well as appetizer or breakfast. You can warm it up in the oven or on a dry skillet , covered and on low heat (no need to turn over).