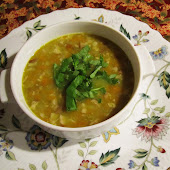 I missed pea soup very badly. Later I rediscovered this soup on a new level. Today's recipe is a classic version of pea soup with smoked meat. November 10, 2010       by Nadia
Traditional pea soup with pork hocks, perfect for warming body and spirit, but requires some patience... 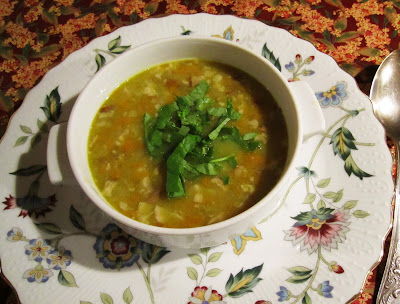 Pea soup has been one of my favourites since nursery school. I still remember its wonderful smell when we the kids used to fall into the building from our outing in the snow. Oh, was it good to throw off the fur coat, the hat, valenki (woolen felt boots), and rush to the table where a bowl of steaming pea soup was waiting for you. That soup was simple and rather thin, but I loved it.
Then there was a dark era where there were no peas in the stores (boy, was there anything at all?). I missed pea soup very badly.
Later I rediscovered this soup on a new level. Today's recipe is a classic version of pea soup with smoked meat.

2 smoked pork hocks
2.5-3 quarts filtered water
1 yellow onion, peeled
1 carrot, grated
1 potato, diced or cubed
1 yellow onion, chopped
Black pepper corns
Bay leaf
1 lb split peas (yellow or green)
2 sauce pans 4 qt for the broth and smaller for peas, and a skillet
Method:
If you want your soup to be ready by dinner time, begin a few hours ahead. Don't panic, this will not require standing in the kitchen all the time. This time is needed to make pork hocks broth. Rub them well with a coarse sponge or scrape with a knife, wash thoroughly. Cover with water, add one whole peeled onion, some black pepper corns, and put on medium heat. When it starts to boil, reduce heat to low. Boil for 1 hour, then add some salt. Check occasionally and if water evaporates too much, add a little boiling water.
When meat is soft, but not falling apart, add a bay leaf to the broth.
Prepare peas in a separate sauce pan. Wash them, drain, and cover with filtered water. Simmer on low to medium heat, uncovered, checking frequently until soft. If water evaporates, again, add some boiling water.
When meat is falling off the bones the broth is ready. It took me a few hours.:(  Fish out all parts, let meat cool a little.
Throw  potatoes into the boiling broth. Saute carrots and chopped onion in 2 tbsp oil (you can also take some fat from the broth surface). Separate meat from bones, remove most of fat, and chop finely or mince with a sharp knife.
Check the peas. If they are soft, put all parts together into the broth. Check readiness of potatoes and salt. If the soup is too thick add some boiling water. Stir well, warm through on low for a couple of minutes. Voila! You have a culinary delectable classic.

Notes:
If you have no luck with getting pork hocks, substitute with smoked turkey wings or legs. Works fine.
I garnished my soup with water cress, it added an interesting note to velvety taste of peas.

Quick pea soup
Add more potatoes (2 instead of 1) to boiling water, peas (cooked separately), saute some diced ham with carrots and onion. When potatoes are soft, put everything together, simmer 2 minutes.. It is also very tasty, but much lighter and good for you dieters. :)

Vegetarian version
Boil potatoes in water until soft, add sauteed carrots and onion,  peas (cooked separately), and spices of your choice. Simmer together 2 minutes. When serving, add a little butter in each bowl.