), and the ugly little peppers (also organic) which did turn out tasting ok. Well, I should probably at least do a salad, thought I, a cucumber salad. What goes well with cucumbers? July 21, 2010       by Masha 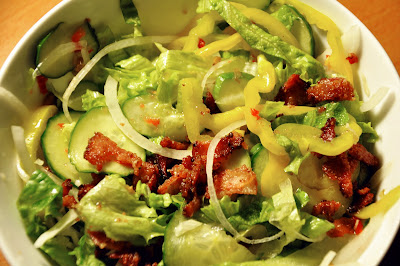 Oh no, there's yet another one of my lazy, spontaneous salads. But it is good, I do promise you! At least one witness does agree with me. Today, after another evening of fruitless apartment hunting in the heat and smelliness of New York, I told Gary over the phone that I was in no mood for cooking. But, as I walked home, thoughts of vegetables bought at this Sunday's farmers' market mocked me. Especially the cucumbers, which turned out to be tough skinned and not particularly tasty (but organic! no pesticide!), and the ugly little peppers (also organic) which did turn out tasting ok. Well, I should probably at least do a salad, thought I, a cucumber salad. What goes well with cucumbers? Cheese? Maybe. Leftover fish? Hardly. Bacon? Why, yes, it does go very well with cucumbers, indeed. Here's the recipe:

How to do it:
First, place sliced cucumbers and peppers in a bowl and pour over all the marinade ingredients, mix well and let stand for 10-20 minutes, occasionally stirring (marinade is strong enough that the vegetables don't need to be submerged in it all the time).
In the mean time, chop bacon into small strips and fry on medium heat. When most of the fat has melted off, sprinkle with bred crumbs, stir lightly several times until the bacon is evenly brown and crispy. This is the breaded bacon to dress the salad.
After 10-20 minutes, sift out most of the marinade from the cucumber bowl, leaving a little in for the dressing. Add the rest of vegetables and oil, mix it up, sprinkle with bacon and serve to yourself and your favorite people. Fresh, sour, sharp, spicy with just a touch of sin on top. Yum!
Tags:    easy • healthy • quick • salad
Summary: a easy salad recipe
blog comments powered by Disqus
Share this recipe:
Tweet
You may also like: